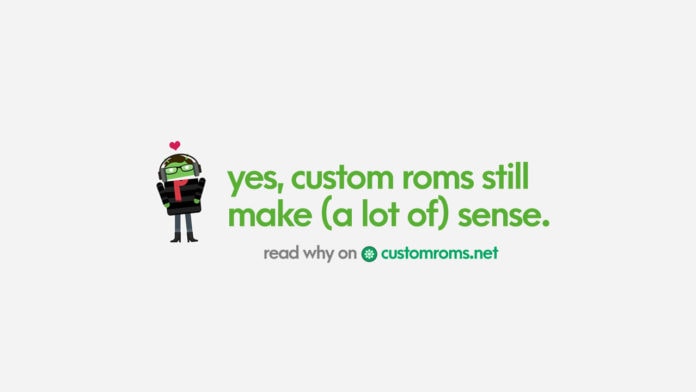 Now that you’ve read the title (see a psychologist if you haven’t), we know, most of you are wondering whether or not this post is going to be biased. After all, our site itself has ‘custom ROMs’ in the name, so is it not possible that we write in favor of custom ROMs? Well, if you’re confused, let’s clear the air for you; yes, this one is going to be biased, because the purpose of this blog post is to let the world know why these custom ROMs still exist, and why they should. Though we’ll try to represent both sides of the coin, keep in mind that this post is still written by veteran flashmaniacs, who absolutely have the mandate to flash and use custom ROMs on all their devices.

First things first, make sure to go through the knowledgebase so that you don’t get stuck somewhere in the middle (also it gets us some extra page views). Done? No? Okay, your wish!

To begin with, we guess all of us can agree on the fact that fortunately, Android has gotten way better compared to what it was a couple of years ago. It now has a lot of features, a lot better UI, a lot of stuff that people flashed custom ROMs for. But, unfortunately, ‘a lot’ doesn’t mean ‘all’. Apart from all the benefits of custom ROMs, there are some pretty solid reasons why after all this time, these still exist.

So, here are all the reasons why we think custom roms still make sense.

Unlike iOS, Android is forked by a lot of brands (almost all of them) to suit their respective devices. Take, for example, Samsung forks Android (AOSP) and calls it One UI, Xiaomi calls their fork MIUI, so on and so forth. If you go around and do some market research, the majority of market share in the Android sphere is occupied by brands like Xiaomi, Samsung, & Oppo/Vivo, especially in the eastern part of the globe. Even in the west, Samsung and Huawei rule the market, followed by OnePlus. If you’ve been an Android enthusiast for a while, you’ll know that none of these (except selective Android One devices) brands use stock Android on their devices, all of them prefer to use their custom flavor. The problem with this is that you (the users) tend to stay under a limit, as to what you can do with your devices, or what you can’t. Take for example, on your stock Xiaomi phone running MIUI, your phone has to run this heavy OS with a lot of apps and features that you’ll never ever use, even once. Or, your Samsung flagship starts to lag after 6 months because One UI is slowly building up on the cache and residual files in the system. Or, your Huawei device allots a hefty space to EMUI on the internal storage.
All this is majorly thanks to the useless crapload of apps and features baked into stock ROMs, lovingly called bloatware, which clearly brands love to stuff inside their ROMs. The worst part is, they can’t be uninstalled like normal apps. Even if you don’t use these, they still reside on the memory, and some even run in the background, feeding off your RAM and battery. Yes, you can try to uninstall bloat from your stock ROM, but these are often so deeply integrated that uninstalling an app would result in other apps crashing and stopping unexpectedly. Plus, they come back when you install a system update. Custom ROMs let you get rid of the entire ‘bloat framework’ by not having even 1% of those useless apps. You can switch to a slim, light ROM that’ll fly through your phone, or go with one that’s more optimized for longer battery life, the choice is yours. Bottom line: you don’t have to have bloatware on your device if you don’t want to.

The elephant in the house: Android updates. Android smartphone sales have been skyrocketing and more people are shifting to smartphones as you read this post. The new phones (and flagships) do get Android system and security patch updates for a set amount of time from their launch, but what after that? Also, what about the x-year old devices that no more get system updates from brands? What about those devices that got no major system update at all? Custom ROMs save the day for all these devices, and the people using them. Not kidding, a Nexus 5 today runs Android Q via custom ROMs, and that phone was launched way back in 2013. What. The. Hammerhead. Android phone manufacturers have improved massively with system update cycles, we’ll give them that, but these updates are limited to newer phones only, that make less than half of the total number of Android smartphones out in the wild. For the (massive) rest of the bunch, custom ROMs are your way out of the outdated Android versions and security patches. This literally extends the life of a device, eradicating the need of upgrading to a new one or staying helplessly, hopelessly limited on outdated software. New features, new UI and better everything on older devices means those ones can still be used as daily drivers, which is good both for users and the environment.

The recent buzz surrounding the unauthorized collection of user data by brands like OnePlus and Huawei raises the doubt as to how much trust user can actually put into these brands. Android itself is a platform which Google uses to collect a massive amount of analytics and user data for marketing and R&D, but with full disclosure. In a world where data is gold, how safe is your gold on your stock ROM? While we can’t really answer that, as most of these forks are proprietary (closed-source), most custom ROMs, on the other hand, are open-source, just like AOSP. That means anyone can view, scan and flag the codes if anything seems fishy. Add to that, you can even go completely Google-less by choosing not to install GApps when you flash your custom ROM, saving yourself from the big G’s tracking. Heck, there are even ROMs like /e/ and Copperhead that keep privacy and security above everything else!

Say, you want to use this awesome ‘Gaming Mode’ from OnePlus phones, but you can’t, because it can only be used in OxygenOS. Or, you want a system-wide dark theme, or you want some fancy icons on the status bar, or you want some cool soft navigation keys from another ROMz but you can’t do that with your stock ROM. We can go on and on with this. The point we’re trying to make here is, with your stock ROM, you’re limited with features, and this is where custom ROMs make more sense than ever before. They let you mix-and-match features that you really need, helping you get a version of ROM that suits you the best. Don’t need those fancy slow animations on your stock ROM? Cool, flash a custom one and enjoy new fast, slick animations. Don’t want the 70-something extra options built into the stock OS which you never use? Cool, get something else which is light and noticeably faster because it doesn’t have all that crap. Annoyed by those nasty intrusive advertisements everywhere on your Xiaomi? You know what to do. Some custom ROMs even let you have features from multiple custom ROMs. That’s some next-level customization (yeah, failed wordplay).

Custom ROMs have those features that you’ll probably see in stock Android in a couple of years from now. Believe it or not, custom ROMs have been the ‘source of inspiration’ for some awesome features that are now baked into AOSP and stock ROMs. Features like App-ops (app permission manager), dark mode & themes (from Substratum & CM theme engine), status bar customization, immersive mode control, heads-up control, notification light control, vibration strength control, capacitive button backlighting, and a lot of features were brought into stock ROMs after they were implemented into custom ROMs. In other words, (some) custom ROMs have more & advanced features than (some) stock ones, and features that still aren’t there on stock ones yet.

Custom ROMs just add that sprinkle of spice on top of your Android experience. Face it, your phone is your most personal tech that you carry and interact with more than any other gadget. Seeing the same UI, the same animations, the same colors, the same overall software makes things boring. Of course, this doesn’t apply to every person, but we ran a private poll across the Android community, where more than 80% people were bored with their phones after a short span of just 3 months, and we can’t blame them for this. Trying out custom firmware lets you get rid of that boredom. Beware though, once you get the hold of it, you’re going to flash ROMs after ROMs, and turn yourself into a Flashmaniac. You’ve been warned!

Lastly, and this is something that we genuinely want every Android user to experience, you get involved in the OG Android community. Android was never meant to be like any other mobile OS (though there’s only one competitor atm). It was meant to be the OS that suits best to the user and not to a brand, and that’s exactly what these ROMs will let you experience. You get into this secret backstage full of true Android enthusiasts. The ones who don’t run to service centers and prefer fixing things themselves, the ones who happily give up on system stability in favor of making the ROM better for everyone, the ones who pick freedom over warranty, the ones who prioritize investing their time and efforts on still keeping this aftermarket development community alive, the ones we proudly call flashmaniacs. You get involved, you get access to knowledge more than the average Android user, and you get to know how stuff works. Worth it. F***in worth it.

That’s pretty much it. To be dead honest, the perfect answer to the question ‘Are custom ROMs still worth it’ would be: ‘Depends on the device you use, and the way you use it’. Some devices have a lit dev community & therefore, a lot of ROMs, while it’s mostly drought for some. Some people use their devices hardcore, while some not so much. We know, there would be compromises, but aren’t you compromising on your stock ROM already? Ask yourself, and if you feel you are, let us assure, compromising on custom ROMs is a better choice any day.

Happy flashing, see you on the other side of the boot animation!

What is CAF, and what’s the difference between a CAF and a non-CAF ROM?

What’s the difference between AOSP based ROMs & Lineage based ROMs?

Why should I root my Android?

What is SafetyNet in Android? Why does it exist, how does it work, &...

Please log in again. The login page will open in a new tab. After logging in you can close it and return to this page.